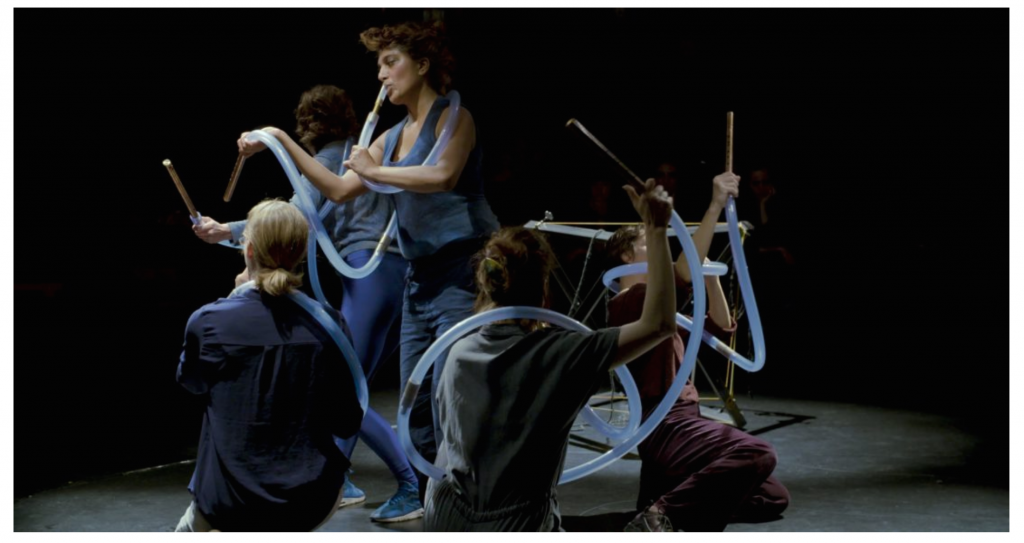 Rita Evans creates sculptures that explore how art can be played and performed to create a collective experience. Stringing The Matrix 2021, is a new work commissioned by Tate St Ives, inspired by the architecture of Constructivist artist Naum Gabo.

Hand-made large-scale brass hoops link into one another creating a globe-like object, attached to spools of coloured thread. Metal hooks are used to weave the thread in and around the structure, referencing the stringed forms that are found in works by St Ives Modernists Naum Gabo and Barbara Hepworth. This process mirrors traditional crafts such as sewing and weaving, as well as the net and rope making skills of local fishermen in St Ives.

Accompanying the sculpture is the film Coil of Days 2019, where a series of Evans’s sound sculptures are played in a collaborative performance, choreographed by Pepa Ubera. The voiceover, written by Amy Lay-Pettifer responds to each of the instruments, read by eight women which overlay the atmospheric audio-visual sounds emitting from the sculptures as they are performed. In her transcript, Lay-Pettifer directly quotes the surrealist artist and occultist Ithell Colquhoun who was based in Lamorna, Cornwall.

Rita Evans will be working with a group of local musicians for a live performance with Stringing the Matrix at Tate St Ives on Saturday 30 April as part of the Last Weekend.

About Rita Evans
Rita Evans (1980) is a British-Canadian artist based in London.

Her works have been exhibited and commissioned internationally, including The Drawing Room, Camden Arts Centre, Banff Centre for the Arts in Canada and Archway Sound Symposium at Five Years Gallery, London. In 2020 Rita was selected for Towner International Biennial and was artist-in-Residence for her commission Theatre of Sound. In 2021, Rita was artist-in-residence at the Bauhaus Dessau Foundation in Germany, where her exhibition Instrument is currently on show at Gropius House, as part of Fictional curated by Florian Strob. Major awards include the Stephen Cripps’ Studio Award, an Acme Residency & Awards Programme with The Royal Opera House, Henry Moore Foundation, and Stephen Cripps’ family.